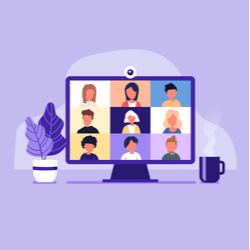 Cupertino Coin Club held its first virtual coin club meeting Friday, May 8, 2020, using the Zoom video conferencing platform. Notification with the link, meeting number, password, and dial-in phone numbers were posted in Cupertino Coin Press which was sent to all members. There were 25 members in attendance which is a really great number considering regular club meetings usually have about 35 attendees and meetings with meals draw about 50. Announcements were shared, mostly of canceled shows. New members were introduced and welcomed. They found our club website and Facebook page and reached out in a Messenger message about how to join. They emailed their application and submitted their dues via PayPal. Not our usual method! A Scout guest and his parent from our March BSA Coin Club Merit Badge Workshop were welcomed. Two birthday drawings were held for April and May birthdays. Four members with birthdays were in attendance, two with April birthdays and two with May birthdays. Prizes for the winners will be held until they can be given to the recipients in person at a future physical club meeting. Show and Tell had eight participants, two of whom were youth. No drawings were held for virtual Show and Tell. We will try it out for our June meeting. Don P. gave an outstanding half-hour presentation on Sacagawea Dollars You Don’t Know About. He took over our computer screens so that we could view his PowerPoint slides. It was informative, engaging and entertaining. Afterwards, members continued to socialize on topics outside of numismatics, which was nice, and reminiscent of what we would have done during break at our physical meetings. Monthly online club meetings will continue until we are able to meet in person in Cupertino. Our club’s 50th anniversary, which was scheduled for April 2020, will have to remain on hold until we can safely meet physically.

This entry was posted in Uncategorized. Bookmark the permalink.